Update: Chitika has shut down their operations 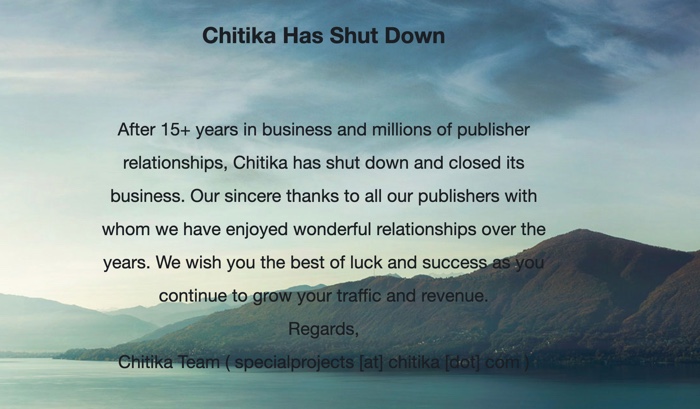 If you monetize your blog using ads, then the best ad network for you is Adsense, but it doesn’t mean that it is the only option, there is a river of Ad networks out there, each claiming to offer the best possible revenue to their publishers, they claim to be the best Adsense alternative.

In this post we will talk about one such Ad network called Chitika, which is one of the oldest and most talked Ad network out there.

Chitika is an Ad network that pays you on the basis on your pageviews and number of clicks the ads generate for the advertisers. So it is a mix of CPM (Cost Per Impressions) and CPC (Cost Per Click). It mainly monetizes the traffic you get from United States.

Before getting into the review of Chitika, let’s talk why would you use an AdNetwork other than Adsense?

There are two main reasons,

If you fall in the 1st category, then you may look at few other options before opting for this ad network  as you may earn more with it. If all these methods do not work for you then you may opt for Chitika to earn money on the basis on your Page views.

For the 2nd category, if you feel you can earn few extra dollars, then you may try using any it along with Adsense.

I have used Chitika on a blog as the onlyAd network on the blog, because I was using my Adsense account on only one blog. At that time the earnings for the blog with 50000 pageviews/month were around $10, which is very low in comparison to Adsense for the same amount of traffic.

This time, I considered using Chitika again on a blog where I was already using Adsense. I was running 3 Ads of Adsense and had two more ad spots available where I used the Chitika ads.

Below is the screenshot for the last 15 days. 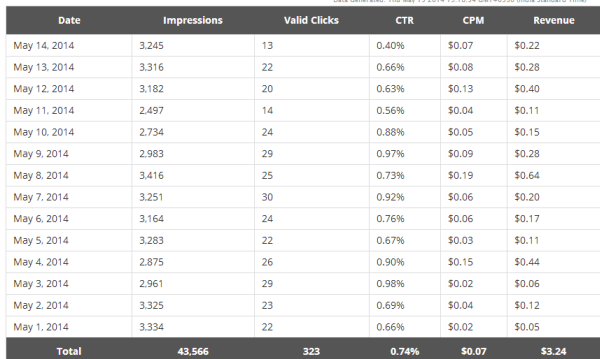 You can see that the revenue is not encouraging enough to keep using Chitika for long. I felt like removing the ads only after 5 days but used it for over 20 days just to see if it might increase over next few days, but sadly it didn’t seem to happen.

Another reason for using the ads for a longer time was that I was told by Chitika that my account was pending to be upgraded to the Gold account, which will give me a chance to get ads that pay CPM of $2. But my account was still pending (for over two weeks) when I removed the ads from my blog. I did not see any point of going with Chitika with a revenue of $3.43 whereas I made $180 from Adsense for the same amount of traffic.

I know that there is no Ad network that is going to pay that much but sending my visitors to the other websites for just a cent did not seem promising.

I have used Amazon Associates Program on my blog in the past and it proved to be much better than Chitika. I may start using Amazon Associates again to fill the other Ad Spots available if I don’t find any better alternative, or maybe I will keep only three Adsense  Ads on the blog.

As I stated in the beginning of this post, there are mainly two reasons you might want to use an Ad Network other than Adsense, but in both the cases, you have many other options as well. Choice is yours.

Review Disclaimer
I had signed up for Chitika in 2008 but Never used it much, I recently used it again on one of my blogs for only 15 days. This post is based on my experience with Chitika for 15 days. It might or might not be the same for you. If you are still curious to use Chitika, I recommend you to use it yourself to see if it works for you or not.

Double Your Adsense Revenue by Using This Adsense Ready Theme