In this post, we talk about the new CMS, A very lightweight script for creating a website that has options of creating a BuzzFeed-like community site with easy front end publishing and all those fancy features. It is a nearly perfect script I’ve used after WordPress.

And I’ll tell you why I chose this script over WordPress. So make sure you read this post till the end.

Now, I’ve been creating websites since 2007. And if it was not for WordPress, I would have been working in some cubicle of a multistory building. It created an opportunity for me to earn my living from things I love doing.

So, in 2017, after 10 years I dared to use another script to create a website. I did create some mini sites in these years but they were simple HTML based websites. It was like getting out of my comfort zone.

There is one more reason for opting for an independent script, WordPress, though, is an amazing CMS, and a blessing for publishers, it has become so heavy with so many features being introduced to it that are not even required by a lot of people.

I remember reading an article about the owner of Viral Nova (a popular Viral site that sold for $100 million) talking about how his site would break if he installed a new plugin because there are so much traffic that even a single plugin would increase such a load that it would break the server.

The Script I am talking about is Buzzy, and it’s quite a lightweight CMS with all the ingredients required to make a content based website.

The installation process is quite tricky, there are some requirements which you can check before buying the website. Check here.

I tried it with three different hosts, (Hostgator, A Small Orange and Dreamhost) all these hosts showed some kind error every time.

I finally settled on Digital Ocean, because it’s the best hosting service to get started with just $5 and scale up easily. (Use this link to get $10 Credit in Digital Ocean)

Even Digital Ocean showed errors but thanks to Awesome documentation I figured it out myself. (Will post a technical walkthrough if you want, tell me in comments)

The support provided by developers is good but you really need to be patient because your queries are replied only once in a day. That time can be really frustrating.

Also, there is no dedicated area (at least at the time of writing) for support, you will have to use the Support tab of the product page of Buzzy script on CodeCanyon.

If your only objective is to create a content based website, and not do any custom codes Buzzy can be a smart choice.

Though you get a lot of functionalities in WordPress, you need a powerful server to run a website even when there is not much traffic.

If you are aiming to get the high amount of users or planning to introduced multiple authors, or open contribution to the general public, A WordPress site will be too heavy for that kind of functionality.

Buzzy offers all that without being too heavy on the servers. I can say this because I’ve been running it from last few weeks and the CPU usage is not much. 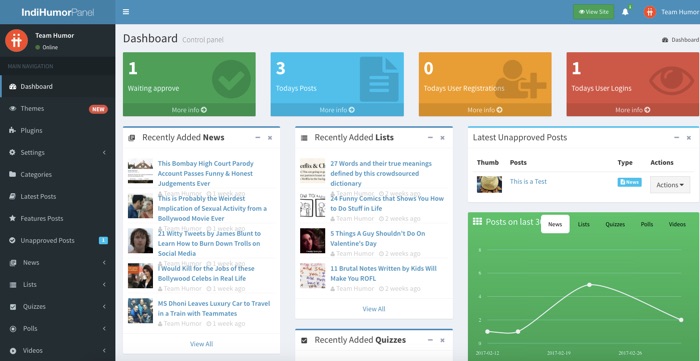 I like the detailed dashboard of Buzzy, apart from being colorful, if offers a lot of information on a single page, this is great if you are planning to create a contribution based site.

In WordPress, if have to click on different options to get info, each plugin has its own area, only a few plugins offer to display information on the dashboard. 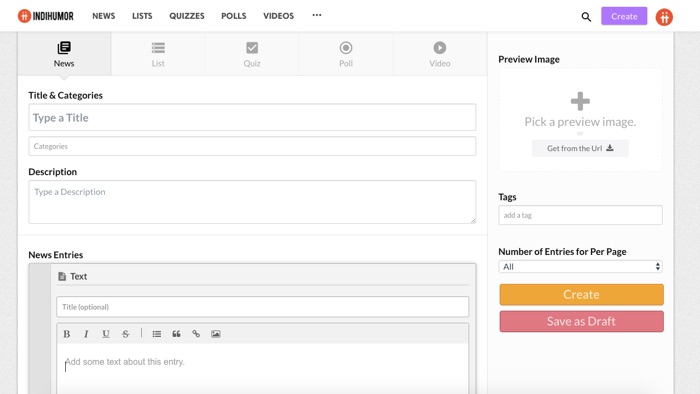 No matter which theme you use in WordPress, the Post Editor will always the same, unless you are using a plugin to get the front end publisher functionality.
But again, that is going to increase the load.

This is my favorite, and probably the reason I opted for Buzzy, The website feels fast, loads fast. I checked with Pingdom and it showed the website loaded in less than 4 seconds despite getting so many requests and many things not implemented according to Pingdom.

What I dislike about Buzzy

Now let’s move to the things I didn’t like in Buzzy and I’ll start with the late point in the list of Likes. 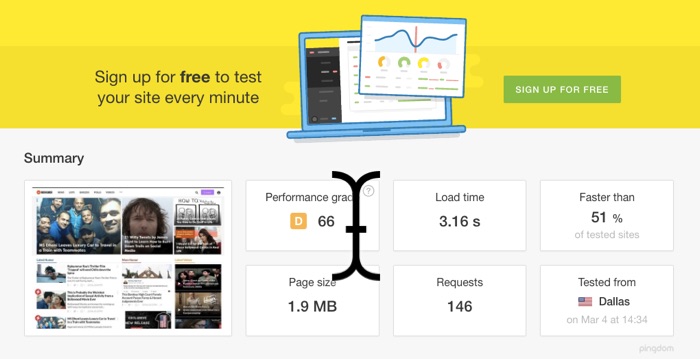 It has limited design options

WordPress has literally thousands of high quality designed themes, you can turn your website into anything you imagine, but Buzzy has just three themes to choose from and there are two more which will be coming soon (according to the dashboard).

But it’s really not a big deal because 90% of the traffic would be coming from Mobile where a user is served a single column site and almost every website looks the same, it’s just the site logo, font, and content which differs each site. And thankfully you can change all these things in Buzzy.

The last update in the logs shows November 2016. And there is still much that can be improved/introduced to Buzzy which will make it even more awesome.

No Community Support like WordPress
After managing to install Buzzy script on my domain, I though it will be a smooth journey from there.

But, In just a few days after installing the Buzzy Script, I found some errors that were tough to fix. The Support provided by the developers is good but It takes time.

With WordPress, I have used to Googling the answers and fixing things myself. But in the case of Buzzy Script, there is not much to Google About unless you really know PHP, MySQL etc, which is rarely the case.

There are still some issues like creating an RSS Feed for posts, changing the URL Structure like it WordPress, making some quick changes to the theme, it’s all just limited because there is no community around the script, unlike WordPress.

Right now I am using Buzzy and it’s working great for me, pot creation is easy for users, though there are not a lot of people who decide to create posts, despite promoting it on Facebook.

Perhaps I’ll have to wait for getting millions of pageviews when a handful of them will decide to create something and share with the world. Or maybe hire someone to create posts. I’ll write again if I changed my mind and move back to WordPres, but that would mean starting the website from scratch because there is no way (at least it’s whatI know right now) to export posts to WordPress from Buzzy or vice verse.

➤ Check out the Demo of Buzzy on CodeCanyon.