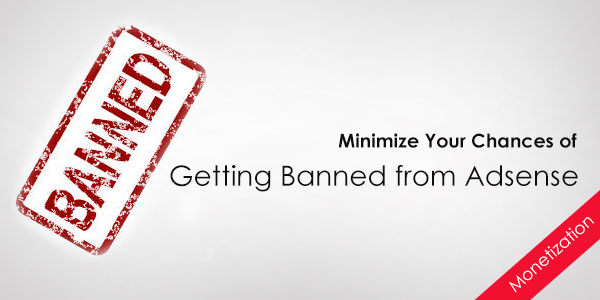 Google Adsense is the most effective of all the Ad networks out there. If you play it right, you can makes thousands of dollars using just Google Adsense, but a single mistake can takes it all away from you and result in your Adsense account getting banned.

If it gets banned (disabled), chances are high that it gets banned for life. I have never seen anyone getting their account reinstated unless you are someone who seems to have known guys from Google, which, I think, most of you are not.

So, the best you can do is, play it safe, avoid things that even has the minimum chance of you getting banned.

And for that, you can go through the Adsense Policy and read each and every point out there. Now there are many points out there which you will observe many websites are not following at all but are still not banned.

To which, Google says, they will keep disabling account as they find, so these guys are lucky that they are not banned, but Google might find them sooner or later.

Here are few points to which Google does not approve of.

You may get a notice from Google Adsense if you practice any of the things mentioned above which gives you a chance to rectify your mistake, but it is advisable not to practice that at all.

Double Your Adsense Revenue by Using This Adsense Ready Theme

How to Maximize Adsense Revenue on Your Blog

Monetising Your Blog with Native Ads like Taboola, Outbrain & ContentAd

Adsense Tips to Make More Money from Your Website