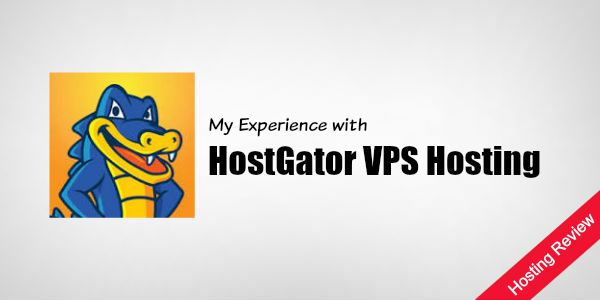 A few days ago I shared the story of my food blog, How it started getting tons of traffic without SEO. While getting crazy amount of traffic is always a great news for a blogger, but with great number of traffic, comes great number of problems as well.

Hosting being one of the most painful ones, because they make your blog suffer at the times when it has maximum number of visitors, your blog faces loading issues, slows down, and in some cases, does not load at all.

Knowing that there are several people wanting to read the content on your blog and getting frustrated with the loading speed, is a terrible feeling.

My blog too went through that phase, and I did whatever I could to keep that phase as short as possible.

This is my review of HostGator VPS hosting, I wouldn’t really calls it a review though, because I didn’t stick with them for too long. So, its basically more like my experience with HostGator VPS.

My food blog was  getting too slow after it started attracting 15,000 page views per day, the blog has a lot of images, (every food blog does) and  was using a bunch of plugins. I tried optimising the website as I knew it was possible to run a website with such number of page views on a shared hosting.

When nothing worked, I opted for upgrading the server, the easier option was to upgrade the servers within the company, HostGator in my case.

After looking at several offers, and talking to their customer rep, I chose Snappy 1000 plan, which is $49.95/month for 1 Core, 1GB RAM, 60GB Disk Space and 1TB Bandwidth.

I know that server specifications of Shared hosting are much more powerful as they run multiple websites, but after tracking my CPU usage and talking to few fellow bloggers, I settled down with Snappy 1000 Plan, I was convinced that my website would run fine as many bloggers have blogs with similar traffic and they are running fine on the VPS.

Now, even though I was just upgrading my account to get a VPS server, my files still had to be moved to a newer server, that would take 24 hours (maximum time given by customer rep) for the transfer to complete.

After purchasing the VPS plan, all I had to do was to create a ticket to request the transfer and wait. And thats what I did. I waited.

I appreciate that I was given each and every update regarding the transfer, the support guy, who was doing the transfer, was updating the ticket, letting me know that someone is actually working on it.

After the DNS was propagated, the actual painful phase started, you know the phase I talked about at the start of this article. Yes, that Painful phase.

My website crashed on the day one, it was offline for several hours for no reason, I had to connect to their live chat support because their phone support didn’t work at all. 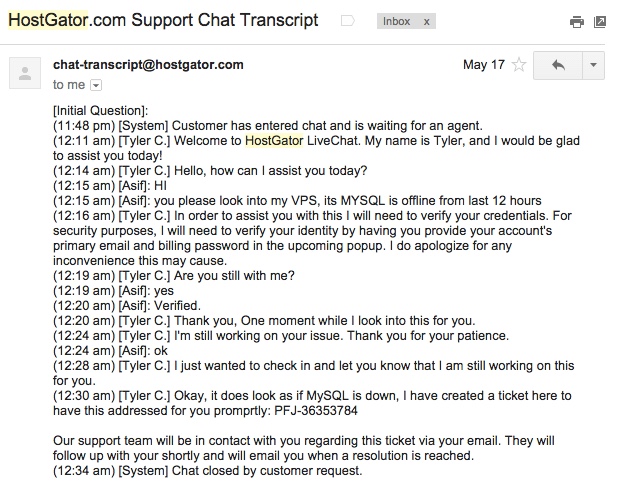 The chat support told me that the MySQL could’t handle so many queries and it got exhausted and needs to be restarted in order to make the blog run normally again.

They created a ticket, and I waited, and this time,  had to wait really long, after several hours, when no one was responding to my ticket, I tweet to the Hostator Support on Twitter, and finally got someone to work on it

Pro Tip: If you get no response from the customer support of any company, try Twitter, works all the time.

So, the MySQL was restarted and the website was back to normal, it was running smooth as well, a regular visitor could easily tell the difference in website loading speed, it was good. I felt good.

“Curious, I got up, went to my home office, start my Computer and what happened next, broke my heart”

Only for a few hours though,

The same day, when I was just about to go to bed, I got a message from a visitor on the Facebook page that the blog is not loading for them, then came another message, then another. Curious, I got up, went to my home office, start my Computer and what happened next, broke my heart. (And this is not a clickbait sentence)

My website was down again, and I was sure that the MySQL had crashed again, so I again raised a ticket to fix it and changed the Nameserver back to the Shared hosting of HostGator

Pro Tip: Do not cancel your old hosting for a few days, probably for a few weeks. They can turn out to be the blessing in disguise.

That time I knew that HostGator VPS hosting is not going to work for me, even if I opt for the next level of VPS, the snappy 2000 or the snappy 4000, I will always have to worry about upgrading when the traffic increases with time.

I was done with Hostgator VPS, I think it’s an over rated service. I know It works for many people, even I didn’t face any problem with their Shared Hosting since last 7 years. But I was done with the HostGator VSP in just two days.

Thankfully I found a reliable hosting called Digital Ocean and the website has been running smoothly. You can read my review of Digital Ocean Cloud Hosting where my food blog is hosted from several months.

I did cancel my HostGator VPS plan after two weeks and requested for a refund, which was credited back to my card. So, if you ever get to that stage where you need a refund, At least HostGator won’t find an escuse to not to refund the money.

I have moved all my other websites on MDD Hosting, which is super awesome for the amount traffic the websites are getting and the functionalities they have. There is no compromise on the speed of the website.

Please note: I still feel that HostGator shared hosting is a great hosting to get started or perhaps for several years until your website needs a bigger and better host. I might go back to the Hostgator Shared hosting in future, I might create another blog and host on it, who knows, but never the VPS Hostgator, Never Ever.