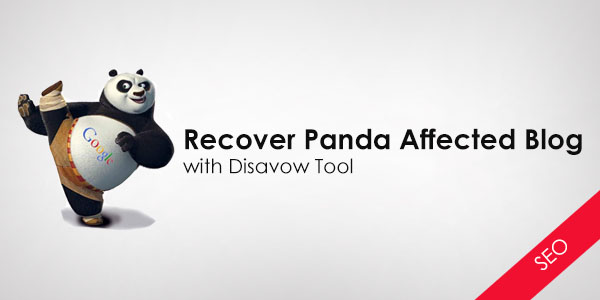 My long time readers know that I run a humble tech blog which used to get over 2000 visitors a day and was growing pretty decently. This was prior to the days when Google decided to bring their search update to make their search engine more relevant.

I quickly taught myself all the things to comply with the guidelines after a few updates. But the blog eventually was hit by the updates and I started seeing the traffic getting lower. 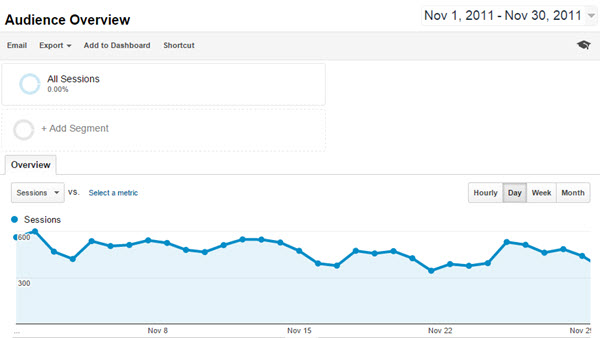 This was November 2011 and my initial thoughts were, that it’s just, what other webmasters call it, was a search refresh and that the traffic will be back to normal soon.

Weeks passed and then weeks turned into months, and finally years, nothing positive happened. I can go on and on about the things I tried to get my blog back to it’s original position but none was useful and my blog kept of losing traffic. 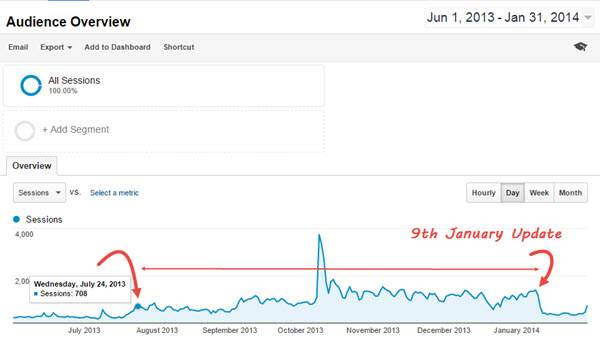 Until I did the complete shift of the blog to a new domain and did a 301 redirect. I started getting back the traffic I lost. But that didn’t last too long. It worked for over 6 months (July 2013 to January 2014) then it again went back to the bottom. (link to the January update)

It wasn’t the only thing I tried in between, I had to delete well over 150 articles because of being thin content (less than 200 words), I did try to expand few of them but it made more sense to delete them as they were about products that either no longer available or tricks that were outdated, (for example the popular Facebook timeline hack)

Anyway, back to January 2013, when the blog was again losing traffic, I lost faith and moved the blog back to it’s original domain, removed the 301 redirect and decided to abandon the blog, only to find that the blog again started getting the traffic after exactly one month. (link to the update progress) 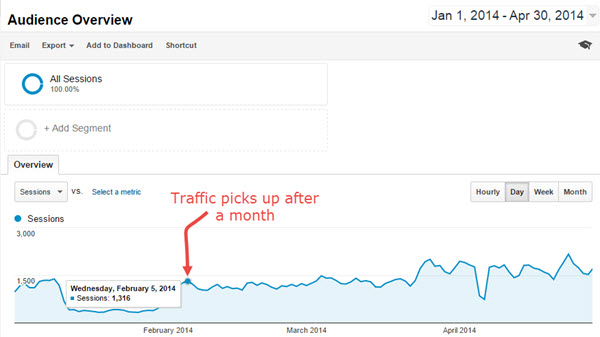 This was the time when my blog complied with all the guidelines, no dofollow links to external sites, no links to suspicious sites at all, every post was more than 300 words, properly formatted, included pictures, videos etc, clean design, optimized for mobile and what not.

It made me believe that Google finally spared my site and is now embracing it back in their search engines. This time, I did not want to take any chance like irregular postings, think content, low-quality posts, So I decided to hire a few writers to keep the content rolling.

Now the blog was getting two high-quality posts a day and the traffic was normal (2000 visitors a day). It made me feel like we are back in mid-2011 and life is awesome. Somehow it made me believe that one day my blog will get 5000 visitors, then 10000 a day and someday it will start getting a million visitors a day, because, well, I was doing all the things a successful blog needs. 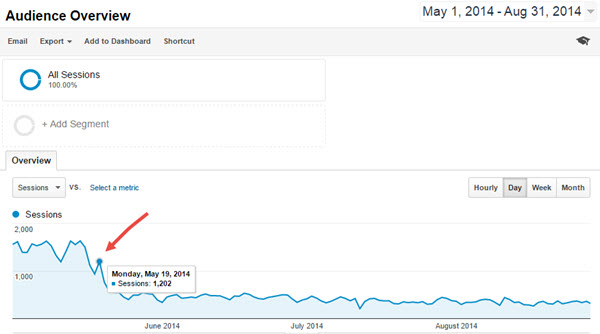 But May 19th, 2014 breaks it all, the sites one again was losing traffic and it felt like 2011 indeed. But I knew what I was going to do the next because dreaming for a million visitors a month was not the only thing I did.

Starting April, it was 3 months since my blog was getting 2000 visitors and all the high-quality content was rolling. I knew something bad has happened in the past. So I started my research.

I had read about the bad links profile in the past but I decided to go deeper this time, because it was the only thing I did not try fixing for the blog, partly because I never thought there was going to be a problem with links as I never went the wrong way to get them in the first place.

I read and understood how many blogs recovered their blogs by removing bad links pointing to the blog, but we all know that asking other sites to remove our links from their sites is a pain in the back. Google understood this and that’s why they created disavow tool disown the back links and not count them to decide the fate of a website in their search engine. 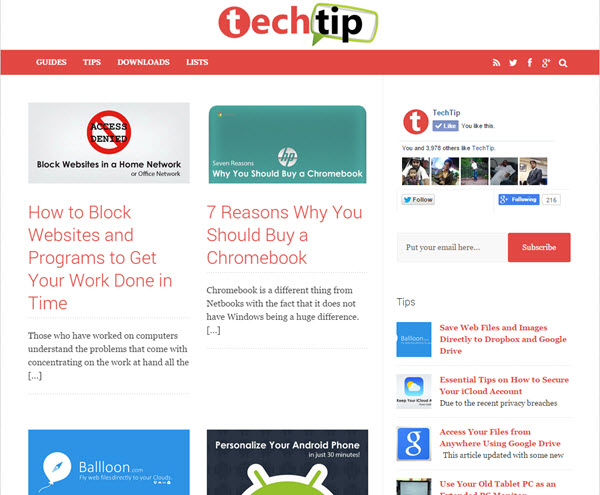 So, when my tech blog again lost the traffic, in the 19th May update, I decided I was going to try removing links. But as per my research, I was quite tricky to decide on which links was in bad taste as every other article I read was giving extra emphasis on the part of deciding on the bad links.

I had two options, hire someone to do this or spend some sleepless nights trying to figure out tings on my own.

I decided that hiring someone would be logical as I can not afford to spend all my time on this blog, I have more blogs that are more profitable and require my attention.

I picked one SEO agency and the next step was to find the feedback on forums, I did find some feedback but most of them were negative and advised the most cliched “don’t give a shit about it, create quality content and they will keep coming back” type advice.

I realized, this was not what I wanted so kept looking for an easy way where I don’t have to spend sleepless nights trying to figure out how a particular software to find links worked. 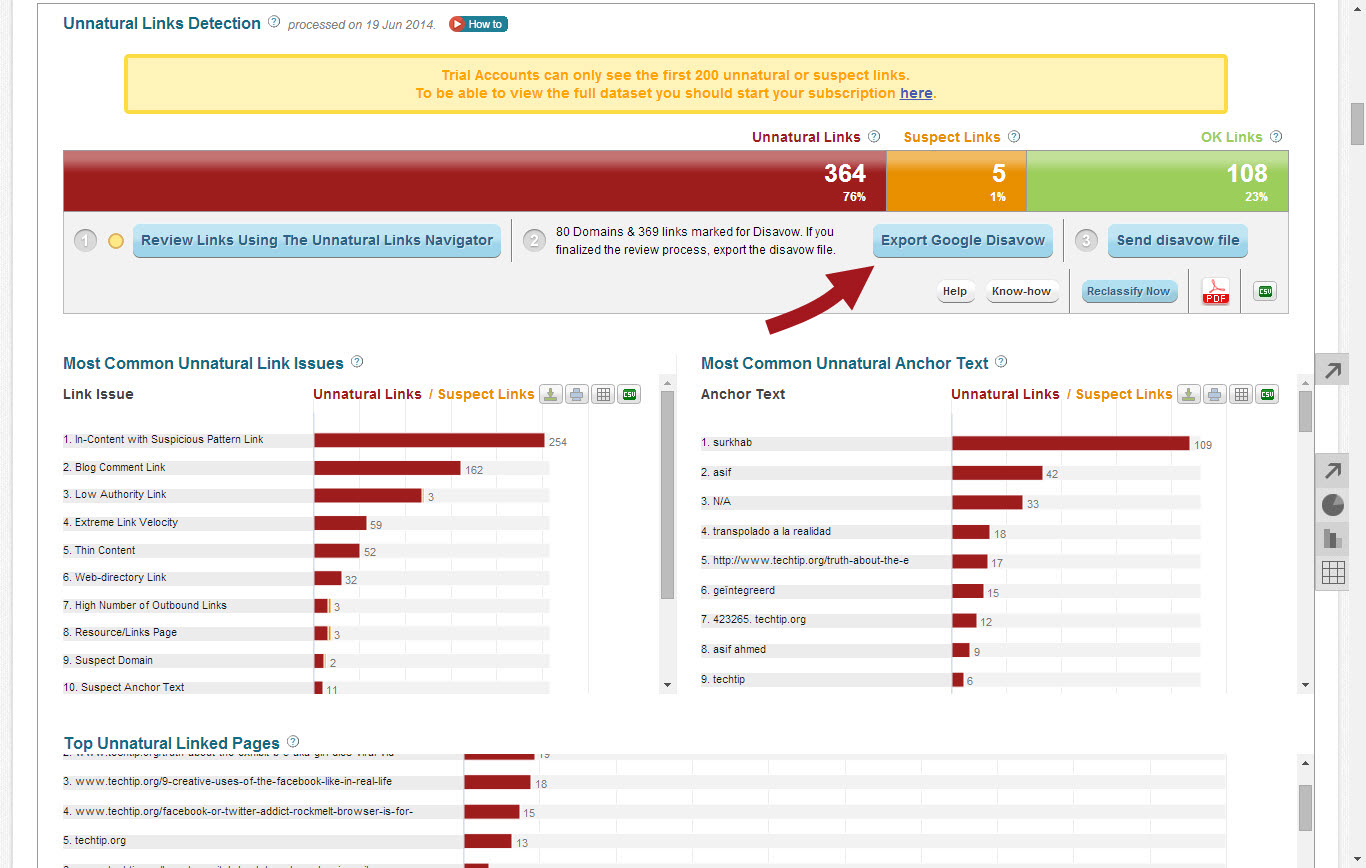 I found the Cognitive SEO software to be quite useful in finding the bad links. It works almost effortlessly and getting bad links was done in a few clicks.

I signed up for the trial version and decided, it is going to be the software I am going to invest my time in learning. Fortunately, it was the first software I was using and was quite easy to learn, it finds all the links pointing to a url you want to check. It then categorizes these links into good links, bad links and suspicious.

It even takes you to the pages where links are found so that you decide the nature of the link. Do that to all the suspicions links and you can save a couple of good links from getting into your list of links to disavow. 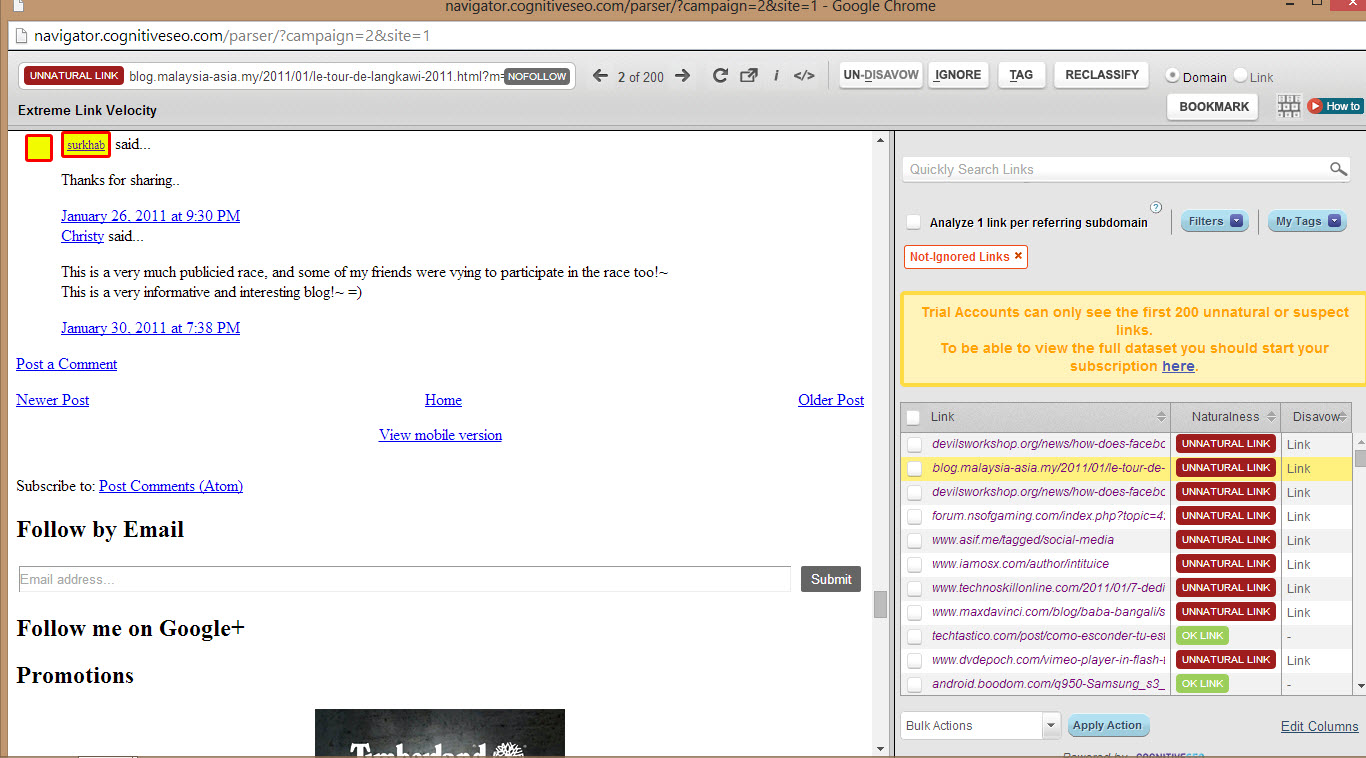 Using this tool, I was able to find what went wrong few year ago when I started the blog. It was linked from Commenting on other blogs. I had actually hired someone to comment on other blogs, but it was never meant to get any link benefit, it was just to get a desperate attempt to get people discover your blog and read it.

When I checked all the links out there, I was really embarrassed to see my blog url with comments like, ‘Thanks for sharing’, ‘Nice posts’ and more one liners that never actually added value to the posts. Looking at all the links I was damn sure these were the links that were doing the harm. and I needed to fix them.

There are some limitations of the Trial software, and if you have a blog with a large number of backlinks, the trial software won’t let you extract more than 150 links at a time. 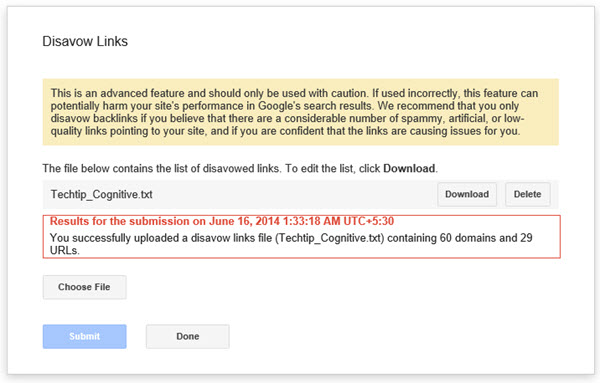 Anyway, Cognitive SEO gave me the links and the next step was to submit the links to the disavow tool in Google Webmaster Tools. That’s what I did and waited. I submitted the links on 16th June (as you can see in the above screenshot).

All the articles I read regarding the effectiveness of the Disavow Tool mentioned that it takes between 15 days to a few months to finally see some changes in organic search traffic. Mine took three months (June 16th to September 23, as shown in the screenshot below). The Google Search update (Panda 4.1) on 23rd September it was. 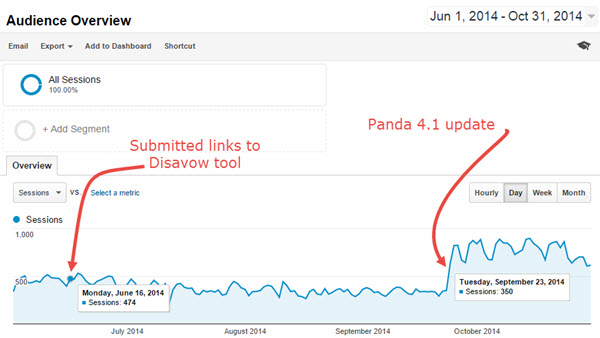 And the fact that makes me believe it is because of the disavow tool, is because I did not do anything else, this time, no 301 redirect, no deletion or expansion of previous posts that would have been considered to be the culprit.

Though the traffic on the website has still not reached where it was previously before going down in May 2014, I am very much optimistic that all the problems have been addressed. And there is a still hope to grow the blog.

I had to wait for over six moths to observe the traffic so that this post can make more sense regarding the recovery of the blog. I have seen it improving though it does not have my focus right now, it’s a blog that’s been profitable since it recovered.

We respect your privacy and take protecting it seriously 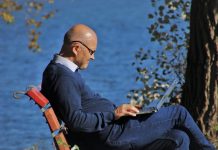 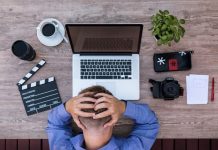 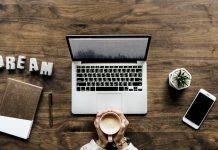 How to Make 2020 Your Best Year in Blogging 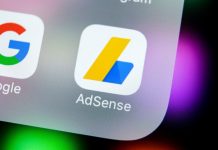 Stop Clicking Your Ads to Avoid Adsene from being Disabled 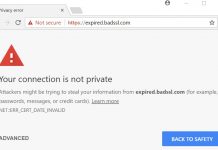 Get Email Alerts When Your Websites SSL Expires

Get The Best Blogging Tips In Your Inbox

*we respect your privacy and take protecting it seriously 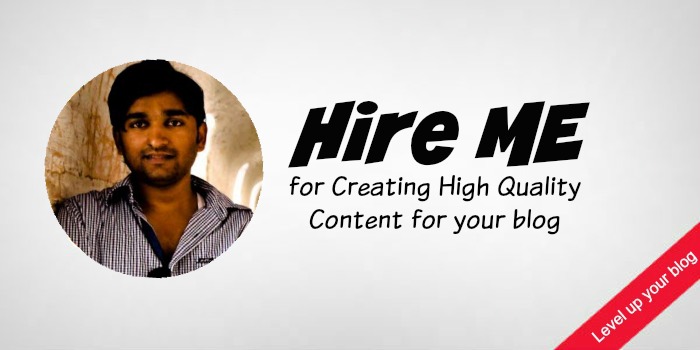 Sign up now to learn the Secrets for
Turning Profitable

A 7-day email course to know how to turn your blog profitable.

*We respect your privacy and take protecting it seriously